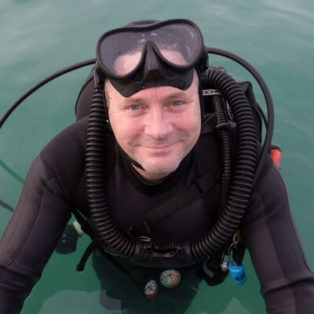 Jonathan Bird is an Emmy award-winning cinematographer specializing in underwater production. His most recent film, Space School, about underwater astronaut training, is among the world’s first digitally filmed live-action fulldome films. He is the host and producer of Jonathan Bird's Blue World, an educational family-friendly underwater adventure series airing on public television in the USA since 2008. It can also be seen on YouTube or www.BlueworldTV.com. This series has won 8 Emmy Awards and its fourth season was released in early 2014. As both the director of photography and the host of this series, Jonathan shares his enthusiastic love of the ocean with audiences as he travels the world exploring marine mysteries and learning about the wonders of nature. He has shot and produced over 30 films for broadcast and education. His films have appeared all over the world, on networks such as National Geographic Channel, PBS, ABC, USA Network, Discovery and even the SciFi Channel. Jonathan is the president and founder of Oceanic Research Group, Inc., www.oceanicresearch.org, a non-profit environmental organization founded in 1990 to promote conservation of the world’s oceans. He is also an accomplished photographer and the author of seven books of underwater photography with articles and images published in hundreds of magazines, calendars and books. www.jonathanbird.net