Share your stories and inspire our audiences! The Macon Film Festival is now accepting fulldome film submissions for its 17th annual festival scheduled for August 18th – 21st in Macon, Georgia.

This filmmaker friendly festival prides itself on focusing on the filmmaker experience while showcasing quality independent films in both traditional and immersive formats.

The Macon Film Festival partnership with Macon’s Museum of Arts & Sciences offers fulldome creators screening opportunities in the state of the art Mark Smith Planetarium which features the Konica Minolta Super MediaGlobe II – plus a 44-foot dome. This state-of-the-art digital system, the first installation in Georgia and only third in the U.S., incorporates a new standard in projection.

A new fulldome live show has just been added to the Fulldome Database, check it out: Dromos by SAT – Society for Arts and Technology This live performance was produced in partnership with Mutek – an international organization dedicated to the promotion of electronic music and the digital arts – and Consulat Général de France […] 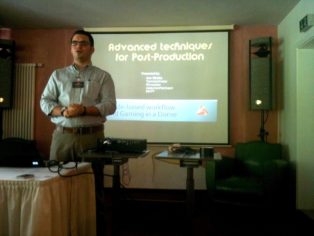 When you have a great day you’re happy, but when the next one is even better it means the whole thing rocks! That’s because the 6th edition of the FullDome Festival is not only about screening fulldome shows, it’s also about meeting professionals who are involved with fulldome productions and love what they do. The […]

As usual, the 7th Fulldome Festival is packed with many interesting workshops and fulldome screenings at the Zeiss Planetarium in Jena. Jeff Merkel, from the Signal To Noise Media Labs, is a sound guy who started experimenting on how he could make his media less static and more interactive in order to create an immersive […]