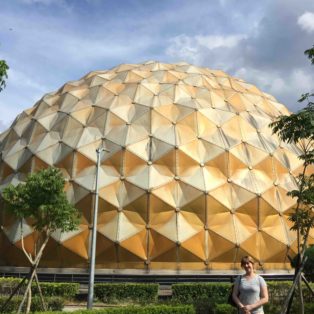 I work with Hubblo; one of the worlds leading go-to distributors for the most sought-after live and turn-key spherical content for domes. Let's connect.

Kelley Francis began working with projection domes in 2008 on sustainability projects abroad in Africa. Since then she's worked as a coordinator for 360-projection fulldome venues and productions across the globe, based out of the Southwest, USA. Kelley combines her cinematic experience regarding domes in Hollywood, large-scale interactive installation experience, and work in the live performance arts to bring contemporary and positively transformational entertainment to fulldome venues and planetariums internationally. Kelley Francis is honored to join the wonderful roster of Hubblo representatives in programming some of the industry's top-quality content in venues across the USA, North America, and beyond. Her immersive and fulldome experience includes work with Meow Wolf Creative Studios, Pepcity’s Super Bowl village in New York, and major film and motion picture productions from her time at LA Center Studios which included collaborations with Youtube, Rock of Ages, and musical acts such as Ziggy Marley and Broken Bells. Hubblo: Hubblo is an emerging independent distribution company programming fulldome and immersive experiences world-wide, based out of Quebec, Canada. This distribution company is building a reputation for collecting and representing some of the medium's most highly sought-after creative works, with a portfolio which includes animation, feature length nonfiction, shorts, creative works, planetarium shows, cultural tales, and live performance fulldome productions. Feel welcome to reach out for a catalogue of dome shows available for licensing, trailers, full length feature previews and a personal introduction to the works in our growing catalogue.