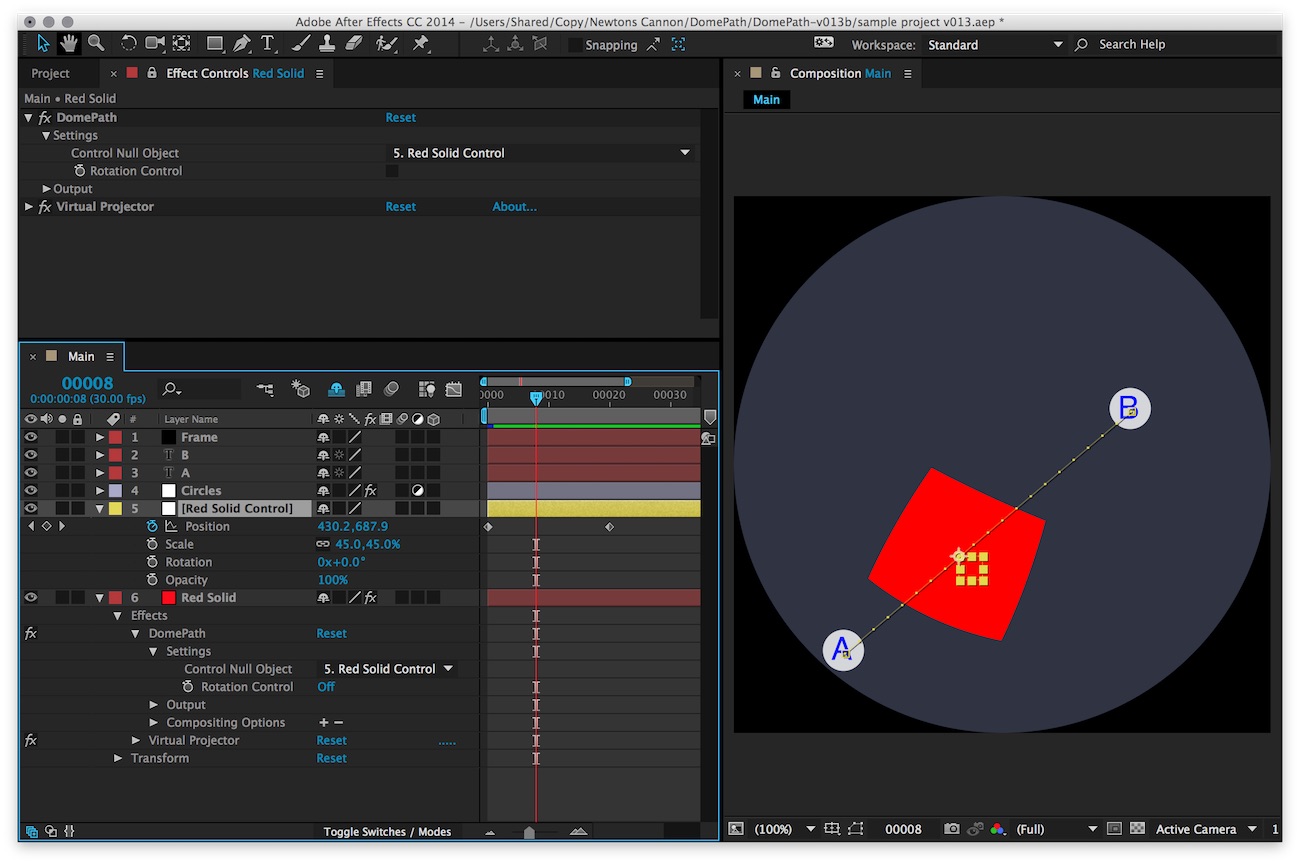 DomePath is a tool to enhance Evans & Sutherland’s Virtual Projector plugin for Adobe After Effects. Here's what's new in version 0.14:

Virtual Projector is a plugin that comes with Digistar planetarium software. It’s used to place images on a planetarium dome master, warping the image so that it will look correct when projected on the dome’s curved surface. Input is in polar coordinates – elevation and azimuth. This is great for arranging images around the dome, but polar coordinates are limiting when it comes to animating.

By animating elevation alone, the image can go in a straight line from horizon to horizon, through the zenith:

By animating azimuth, the image goes in circles around the zenith:

But what if you set keyframes at points A and B and animate between them? You won’t get the straight line you might expect! It’s not a bug, Virtual Projector is doing exactly what it’s told: animate azimuth and elevation as separate parameters:

So what if you want to animate straight-line paths or something more complicated?

You can learn more about Domepath as well as read the software instructions on the official website.

Samford University’s Howard College of Arts and Sciences offers a joint position of Chair of Physics and Director of the Christenberry Planetarium.

Attendees at the upcoming Imiloa Fulldome Film Festival in Hilo, Hawaii, will see three offerings from the Loch Ness Productions library of fulldome shows as part of the event’s extensive lineup of presentations. Chaos and Order: A Mathematic Symphony was selected by the judges for inclusion in the main festival schedule. Produced by media artists […]

A new fulldome show was just added to the Fulldome Database, check it out: MUSICA: Why is the Universe Beautiful? by Yamanashi Prefectural Science Center & Live Company Ltd. Info and trailer available. Hiromitsu Kohsaka, director of the award-winning Hayabusa: Back to the Earth, now brings you MUSICA. This elegant program strives to explain beauty […]