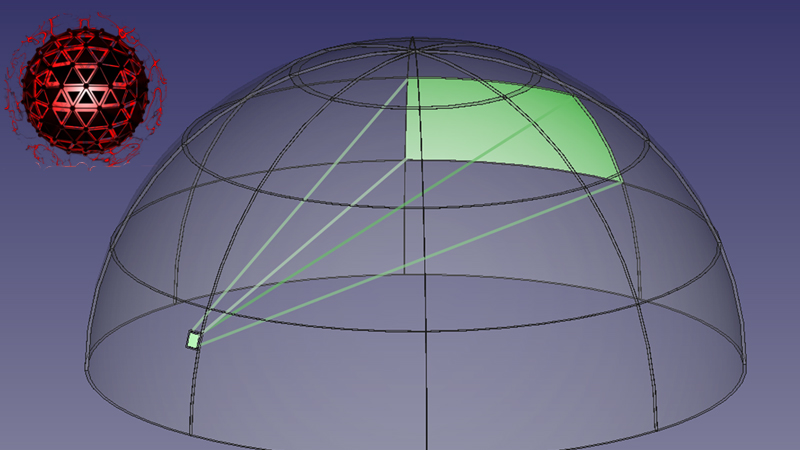 Whether you call it cross-bouncing or auto-parasitic light, anyone who has ever created  fulldome visual content will, at some point or another, face this phenomenon which greatly affects the quality of the visuals in terms of image contrast. Yet little or no tools are available to easily simulate the effect of cross-bouncing. About a year ago, N.E.S.T. Immersion launched its website offering artists a new distribution hub to sell or share their artistic fulldome content. This year we are very proud to announce a new feature on the site, featuring production tips and free online tools to help the fulldome community in their creation process. Our first tool available is an auto-parasitic light simulator that calculates the light-bounce generated by your image when being projected onto the dome screen. The original frame is then superimposed on the simulated-light to give you a more realistic idea of ​​its final result when being projected within the dome. This project was developed entirely by NEST Immersion. We’d like to thank Jason Fletcher and the Charles Hayden Planetarium of the Boston Museum of Science for their collaboration, allowing us to test the accuracy of the simulation by comparing 35 simulated images with their real rendering in the dome. The results can be seen below: Original frame:  the original dome-master frame which we compared. Real image:  the frame being projected on the screen of the planetarium (photographed with fisheye lens). Parasitic simulation: the same frame after the parasitic light simulation.

The tool may not give you exact results, but it does deliver a very good overview of the final rendering and can allow artists to adapt their visuals according to this phenomenon. You can use the auto-parasitic light or cross-bouncing simulation for free, read more about how the tool works, and tips to help minimize its effects here. We have more tools in the works, so visit the site often!  If you have special requests, you can contact Patrick Pomerleau (project manager) at info@nestimmersion.ca.

FDDB was so successful that we are pleased to announce the new FDDB Partnership Program. IMERSA was the very first to believe in the project, join it and partner with us. Many others have followed, and more are due to come. Anyone active in promoting the fulldome media can request to become our partner. Just […]

Fulldome Shows Added in May 2013

20 new fulldome shows have been added to the Fulldome Database in May 2013. Check them out: Earthquake: Evidence of a Restless Planet by California Academy of Sciences Hayabusa – Back to the Earth by Live Company Ltd.   Origins of Life by Mirage3D Moons: Worlds of Mystery by the Charles Hayden Planetarium, Museum of […]