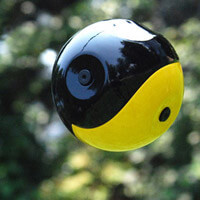 The fulldome community is always keen to hear of new technologies that could be used for the dome. So I naturally think about all the possible fulldome uses when hearing about a throwable camera ball – Squito - that has onboard orientation sensors to capture and process images over the course of its airborne trajectory. Throwable camera innovations are accelerating with advancements in sensor and imaging microelectronics,” stated Hollinger. “And with the advent of low-cost, high-speed cameras for outdoor recreation, an affordable throwable camera is finally within reach. Hollinger’s patent describes a ball-shaped camera with position and orientation sensors determining the relationship between a spiraling or spinning aperture and a subject of image capture. Such a relationship allows, for example, images to be captured, re-oriented and stitched into a panorama. The technology further allows for the stabilization of video, making a camera capable of registering frames captured in sequence. Images and video are transmitted wirelessly to the user’s phone, tablet or desktop. It could be very interesting to see what fulldome producers do with a tool like this. While the results are immediately usable for still frames, the tracking software needs some smoothing out before its video output is ready for the dome. But instant 360° captures of an environment is quite tempting! Below is a video showcasing the technology in a prototype form. I'm curious to see more! Image courtesy of Serveball

Two new fulldome shows have just been added to the Fulldome Database, check them out: Climate Change – What Future Are We Facing? by Albedo Fulldome Extrasolar Planets – Discovering New Worlds by Albedo Fulldome & “la Caixa” Foundation Both shows are still in production and will be released in June 2013.

A new fulldome show was just added to FDDB, check it out:   Kaluoka’hina – The Enchanted Reef by Softmachine   Information, trailer and full length version available.

Lynette Walworth’s latest fulldome production, Coral Rekindling Venus, will light up at least 25 domes around the world starting this week as part of their Transit events and subsequent screenings. As part of the Transit of Venus celebrations, the show will captivate audiences from New York to San Francisco, Greenwich to Montpellier, Brisbane to Buenos […]