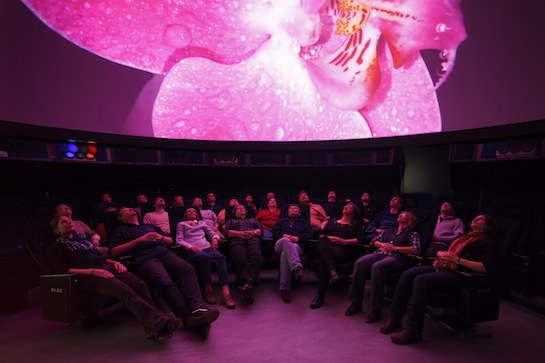 It's Saturday, last day of the FullDome Festival. By now all attendees had had many German sausages and beers, had enjoyed the nice weather and had fun meeting other fulldome enthusiasts from all around the world.

We started at eleven o'clock with Micky Remann introducing Dr. Heidi Kjär, from the University of Kiel. Dr. Kjär gave us an interesting introduction about the history of the immersive media, showing how our understanding of things in a 3D space turns out to be pretty easy for us as human beings evolved in just that way.

New technologies come up on daily basis but most of them are somehow "conservative", with no drastic changes. With all immersive media - not only fulldome - we now get the chance to rethink what we know about theaters and cinemas and try new efforts to think constructively about how to build the next immersive media. The University of Kiel had its dome installed back in 2003, and was able to organize the first class about Media Production from the following year. Since 2006 they also had specific courses about Immersive Storytelling and Fulldome Design. In 2010 the group founded the Institute for the Immersive Media - which considers much more than just the fulldome (i.e.: 3D videos, video games, etc.) - and have many connections with other universities worldwide. The team was also able to get a grant to build a laboratory for immersive media, fully equipped with cool things like projectors with polarization filters, multiple cameras for eye tracking to analyze how people perceive the immersive media, a XBox Kinect device and so on… with even a wonderful coach!

Dr. Kjär also invited three of her students to present two new projects: a new website for all the immersive media and a student-made festival for spatial media, which will take place in November this year and - of course - will be added to our FDDB agenda shortly. We stay on the topic of immersive environments with René Rodigast, from the Fraunhofer Institute for Digital Media Technology, who introduced us to the Spatial Sound System which was installed in Jena's planetarium.

After walking us through the evolution of general audio systems - from the mono channel, to stereo, 5.1 and so on - we got an interesting overview and demo of the spatial sound technology: sound objects can now be localized in any location within the auditorium, which dramatically improves the overall immersive feeling you can get under the dome.

Let's see if the next year's FullDome Festival will feature some sort of Spatial Sound Award, it would certainly be awesome to give to students, producers and professional filmmakers such a great chance to experiment with this amazing technology! After the lunch break we moved up to the lecture room where Prof. Christian Janecke gave his talk: "In the thick of it - Immersion from an art historian's view".

Through well-documented slides filled with many beautiful paintings and photos, Prof. Janecke focused on looking back in time and reviewing how immersion has been achieved and developed during the years, supporting his presentation with a great knowledge about art history and theory.

The audience enjoyed the amazing and original approaches made by past artists, something that could still inspire the whole community to experiment with new creative ways of dealing with immersion, even beyond the fulldome world.

Something different was waiting the audience after the break, a "shift" from rendered shows to live acting under the dome. Nina Wise, in collaboration with the California Academy of Science and the Morrison Planetarium, produced this live-action program: "The Kepler Planetarium Project: a play about paradigm shift then and now".

Together with Tim Florian Horn, from the Academy, Nina brought to Jena a few extracts of her play. While interacting with visuals on the dome directed by Tim, Nina introduced the audience to the story of 17th century astronomer Kepler, whose astronomical discoveries played a key part in launching the scientific revolution. The first paradigm shift is by Nina herself, who enters the arena as an old man, the old Kepler. A remarkable section was the one where Kepler went through the letters he got from other scientists, even though not hearing from Galileo made him sad.

The Kepler Project is also available for distribution: visit the project's official website for more information. By now it is hoped that you have seen some photos from the festival. You might have noticed that on a few of them there are two special testimonials: Janus and Venus.

The latter doesn't need introduction, the first probably does. From ancient Roman religion and mythology, Janus was the god of beginnings and transitions, usually drawn as a two-faced god since he looks to the future and the past. This particular feature makes him perfect to fully enjoy the fulldome medium and it was picked as the testimonial for this year's festival. This was also the starting point for Micky Remann's final talk, "Janus 2.0", on an almost-real project of a head device able to create an immersive digital environment which can combine the real and virtual environment together by extending the user's visual range and acuity. Just like Janus, this piece of technology will allow you to enjoy a true fulldome experience. There even is a manual complete of all the details… com' on, Micky, bring it to the market!

So we came to the end of this amazing event, the Night Gala, where the award ceremony took place.

The awards were presented to 5 out of 29 students' clips, each endowed with 500 Euros prize:

Honorable mentions for outstanding and innovative fulldome productions had been presented to 8 out of 27 non-student fulldome clips and short film, decided by the festival directors:

Honorable awards for full length feature shows had also been presented to 3 out of 31 films in honor and recognition of pushing the fulldome medium to higher levels:

[You can look at the official press release here] The festival has been a long run but it's also been a lot of fun. The organizers capably put together a perfect mixture of screenings and workshops, which brought along many international players of the fulldome world. The organizers also took care of scheduling many breaks, which allowed the attendees to socialize, interact and discuss with each other what they had seen, which is surely the best way to improve both ourselves and what each of us do.

A huge thank you to everyone who has been involved in making the FullDome Festival 2012 an amazing and memorable event for the fulldome community. And a special thank you to all of the organizers and their staff, without whom none of this would have probably been possible!

This was the 6th edition of the festival, and they already started working on the next one. No doubt that this event will surely grow and become an yearly appointment on the international fulldome agenda.

FDDB has tried to help this process by reporting what was happening and sharing with you the exciting time we had in Jena. Hopefully we were successful. We are surely looking forward to what's coming next!

New Fulldome Show: Climate Change – What Future Are We Facing?

Albedo Fulldome is proud to announce the release of a new fulldome program, check it out: Climate Change – What Future Are We Facing? by Albedo Fulldome Info, trailer and full preview available. 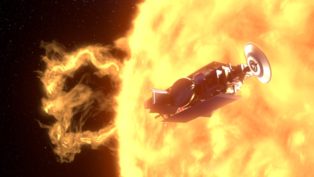