As we’ve mentioned many times already, the fulldome format is great for much more than solely astronomy-oriented programs, and though this stereotype is yet to be broken in the minds of some planetarians, 360 degree media have successfully met a new age of interactiveness. André Wünscher who is an old friend of the FullDome Festival, and was working on a Unity 3D application for the environment at the Zeiss-Planetarium Jena, further developed this idea on the stage of the Frameless Frenzy Forum. Throughout previous festival editions André Wünscher demonstrated a variety of applications, from astronomy to real-time visualizations. This year he managed to bring an interactive, 3D-visualization of Jena – with buildings, architecture plans and sites. For a start, André showed to the audience a church based on his photogrammetry project from last year. Then things got even better when he undertook a flight over Jena – the city as we know and love, yet shown from another perspective – both in time and space. By working on 200 GB of data, including 30 GB of photos, André Wünscher created a massive and immaculately beautiful project. Although the output capabilities were reduced to 2K due to hardware limitations, the overall effect was jaw-dropping. All things considered, this architectural application built upon the Unity game engine proves that the dome is a perfect environment to visualize architectural projects even at professional level. 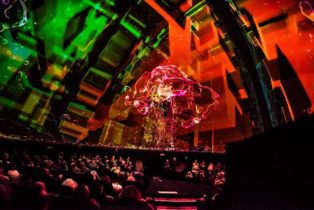 Based in Berlin, Fulldome Studio DN has been working on a new fulldome production to be released in April: "The Great Undersea Adventure of Barney & Beenie."