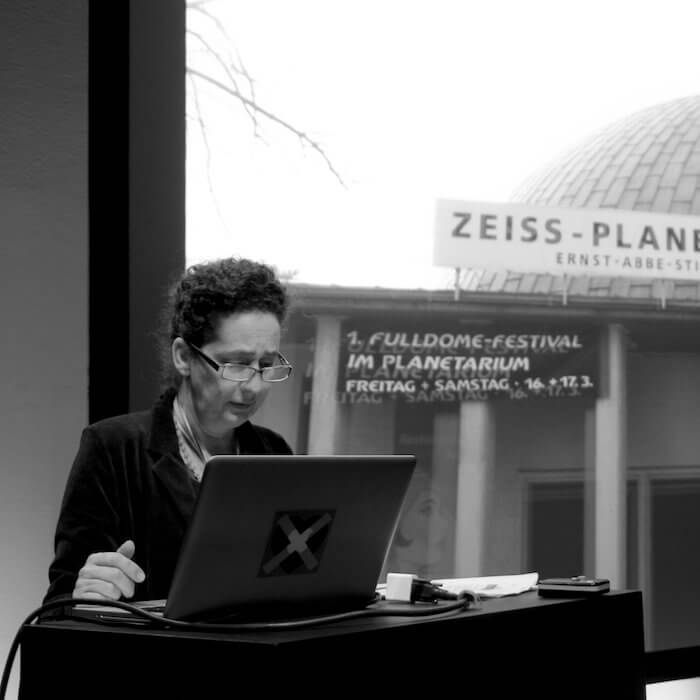 This year’s Fulldome Festival saw the participation of university professors involved with Fulldome. Rotraut Pape is professor of Film and Videos at the HfG Offenbach University, and she is a pioneer of first generation of German fulldome artists. She always looked at Fulldome as a canvas for artists to create new ways for telling stories.

As an artist you want to keep close to whatever technology is available.

During her talk Prof. Pape acknowledged that media – theaters, TVs, cinemas, etc – have changed over the years, but there was always some sort of frame (rectangular, usually) to which the viewer is exposed. In this sense, fulldome is a revolution. No right angles, nor frames anymore.

After about 90 years of optical mechanical planetarium systems, fulldome digital projection opened a new era of creativity in domes and both “Men and machines are now overwhelmed when trying to create dome masters.”

Prof. Pape also happens to be part of the history of the Jena Fulldome Festival, too. She was the one who approached Micky Remann – one of the Festival organizers – and proposed the idea, which led to found the first Fulldome Festival in 2007. The students started creating pieces that were screened in many other festival over the years, offering ideas and inspiring the fulldome community in different creative approaches.

Her teaching system "is like snowboarding: one learns, and the following year, one teaches." Students use many different approaches to produce content: they use computer animations, but also work along with older analogue devices – although their work with real video footage is particularly difficult due to the flatness of that rectangular format which doesn’t suit the dome.

Much of Prof. Pape's vision can be found in the video reel she showed to the audience as well as in her final quote: "If it was up to me, I would remove the chairs from all dome theaters for a real multidirectional fulldome experience!"

A new fulldome short film was just added to the Fulldome Database, check it out: Waiting Far Away by the Charles Hayden Planetarium, Museum of Science, Boston Info and full preview available.

A new fulldome show was just added to the Fulldome Database, check it out: