Report from the 2014 Symposium in Lucerne

We recently attended the 2014 Symposium of Planetariums in Lucerne, Switzerland: a new event in the planetarium scene that brings together affiliates from three different associations: APLF, GDP and PLANit – the French, German and Italian planetarium associations respectively.

The state-of-the-art Swiss Museum of Transport turned out to be a great location for the event: the planetarium was renovated very recently with a brand new Digistar 5 system by Evans & Sutherland. There was also plenty of room for conferences and featured talks, many of which were translated into three languages almost in real-time.

One of the most interesting talk was the one that brought the presidents of each association to the stage: Marc Moutin for APLF, Björn Voss for GDP, Gianluca Ranzini for Planit. The three of them were interviewed by Planetarium Director Daniel Schlup, who let them speak about what the planetarium scenario is like in each country.

Both Germany and France welcome about 1.2 million planetarium visitors each, with Italy seeing a much smaller affluence, about 400K.

Germany and Italy consider the school audience to be very important for their activities, with students summing up to 50% of the whole audience. Such a high affluence from schools is apparently due because teachers don’t feel confident enough to teach astronomy in class: they’d rather let planetariums do it on their behalf. The situation in Germany is a bit worse, with recent negative developments that are making astronomy progressively disappear from school programs.

On the other hand, the majority (>50%) of visitors in France are families, with parents enjoying learning new things together with their kids. Also, it turned out that Germany has a new and steadily increasing segment of young adults that enjoy hanging out in planetariums, which led planetarium managers to invest and develop specific offerings focused on this specific age.

No surprise there was a very compact and strong agreement among all Presidents about the well known economic crisis impacting the planetarium business too.

The main concern was about constantly decreasing families’ incomes, as well as the lack of both private and public fundings. Even Switzerland had to fight a bit in order to gain the required budget to upgrade the system in Lucerne, which ended up successfully because it was highly supported by visitors’ feedback.

This year APLF celebrates its 30th anniversary. Among their goals, one is to produce more fulldome content, as well as starting designing an effective agenda that could allow associated planetariums collaborate stronger.

Planit presented its annual project of inviting an American planetarian to Italy, to stimulate young students and high school teachers by showing them different ways to teach astronomy in class. Very recently, the association also introduced an annual competition that gives money awards to Italian producers who make either fulldome or flat films focused on astronomical topics.

GDP is the biggest association of the three, with about 300 members of what they call ‘a huge potential that hasn’t been disclosed yet’. Their main goal is to increase networking and have stronger collaborations within the community.

A Lot of Fun Too

This sort of event is surely worth attending because of the networking potential they have: planetarians gather together and get to know each other as well as learn what other people are doing.

Although we attended quite a few of these international events, one of the biggest surprises was seeing Film Director and Producer Peter Popp playing Softmachine’s tunes with his guitar together with musicians Paul Wyett and Uwe Lukatsch. This was totally unexpected, and we couldn’t help filming it! 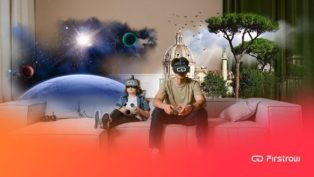 Together with Firstrow we deliver a super immersive VR experience right to your home, where you will always take place in the best seat.