The Infinite is a new, NASA-inspired immersive installation. In this talk, Julie Tremblay (PHI Studio) with panellists Paul Raphaël and Pierre Blaizeau (Felix & Paul Studios) present their project of an immersive touring exhibit that takes visitors on an awe-inspiring interactive experience to Space. The video was recorded at the 2022 IMERSA Summit, in Montreal, Canada.

Paul Raphaël is one of the principals of Felix & Paul Studios. An immersive entertainment revolutionary, Paul combines creative and technological innovation to design ever-evolving forms of storytelling. The EMMY ®Award-winning filmmaker, visual artist, director and studio head is known for his projects’ remarkable sense of presence and ingenuity. He’s enhanced how viewers consciously and personally connect with an experience, creating incredibly life-like, emotionally authentic worlds through the technologies of VR, AR and MR. In a decade-long collaboration with his Felix & Paul Studios co-founder Félix Lajeunesse, he designed the camera technologies that brought the duo’s concepts to life. Together they created the first-ever cinematic VR experience, Strangers with Patrick Watson — the project that launched Felix & Paul Studios in 2013. Since then, Paul has co-directed and overseen the creative direction of the studio’s 21 projects, including the EMMY®Award-winning interactive feature The People’s House with former-President Barack Obama, original VR fiction-feature experience Miyubi, and documentary series Space Explorers in collaboration with
NASA. He’s brought his expertise to recent co-productions Roger Ross Williams’ Oscar-winning Traveling While Black, NFB-Clyde Henry Productions’ Gymnasia, and is working with TIME on the latest filming of Space Explorers aboard the International Space Station, using Felix & Paul Studios’ specialized cameras. Spurring the evolution of storytelling as an interactive experience, Paul works closely with expanded technical teams and creative partners to lead Felix & Paul Studios into an elevated future of immersive entertainment.

Pierre Blaizeau is vice president of operations and technology at Felix & Paul Studios. He helps businesses define and align their technical and business strategies, clarify their product vision, and build empowered and productive teams that make those strategies a reality. With over 20 years of experience managing development teams in Europe and North America, he is an experienced director, mentor and builder.

Julie Tremblay has over twenty years of experience in project and team management on experiential and immersive projects that have continued to grow in complexity. Since 2017, Tremblay has been busy developing PHI Studio's location-based expertise. She produced the touring exhibition version of Carne y Arena and its presentation in Montréal and Denver. She also worked on the production of the installation of the virtual reality work, SPHERES, presented at the PHI Center and Rockefeller Center in New York. In 2019, she curated the PHI Gallery, Theater of virtuality, in Venice from May to November and in 2020, Breathe, an augmented reality work she participated in, was selected for the Sundance Film Festival. She is currently working on the production of the experience L'INFINI, in collaboration with Felix & Paul Studios and Time Studios

A new fulldome show has just been added to the Fulldome Database, check it out: Little ABC by Fulldomefactory by Ilusa Media Info and full-length preview available. 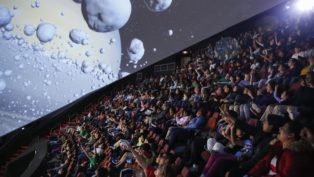 Liberty Science Center in Jersey City, NJ is seeking a 'STEM Educator-Planetarium' for its Digistar-based planetarium, one of the largest in the world.