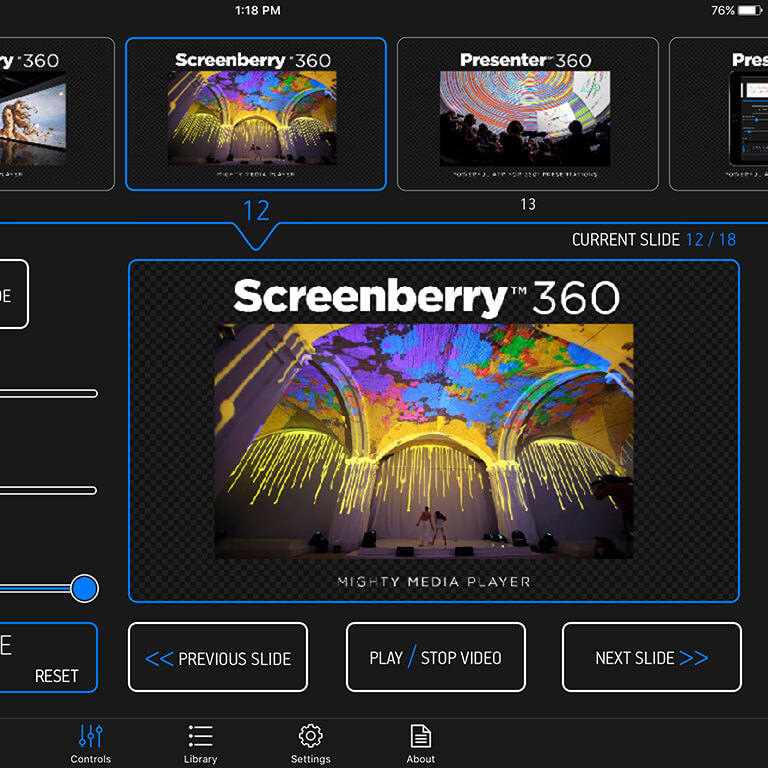 Front Pictures has created Presenter360, a powerful immersive presentation and slideshow tool for fulldome theaters. This innovative product makes the process of designing a fulldome immersive slide show as easy as using a traditional slide-presentation tool. This dramatically reduces the time and effort required to prepare a fulldome optimized presentation that makes full use of the screen space provided by a dome theater. One of the strongest features of Presenter360 is that it is able to work in real-time which completely eliminates the time intensive process of having to pre-render show material in advance. This means you are finally able to revise a fulldome slideshow even at the last minute with no delays. The Presenter360 software has been in use for over 3 years at the Kiev Planetarium and is now available for licensing. The Presenter360 pricing varies based upon the size of the dome and the number of projectors used. For playback in the dome, the Presenter360 server program works on 64-bit workstations running Windows 7/8/10 and supports both fisheye and spherical mirror based single projector systems. You can also render a Presenter360 presentation out in real-time to a domemaster 180° format if you want to use the video stream with a capture card and your existing fulldome projection system. If you have a Front Pictures fulldome media server on site at your dome, the Presenter360 software is also able to use calibration maps to warp and output video signals for multiple fulldome projector systems too. When you are showing a Presenter360 slideshow to an audience, there is an iOS app called "Presenter360 Control" that provides touch-based interactive control over the presentation from the convenience of an Apple iPad. There is also support in the Presenter360 software for using a Logitech Presenter remote, or Leap Motion based gesture control too. Presenter360 has full unicode text support for creating multi-lingual presentations and is able to work with right-to-left languages like Hebrew and Arabic, and with composite characters like Chinese, Japanese, and Korean languages. A Presenter360 based show is created using a free Windows based companion application called Presenter360 Editor that can be installed on a separate computer or laptop. The editor tool allows your staff the freedom and flexibility to prepare and edit a presentation in advance. The Presenter360 software is compatible with all of the standard image formats in use today like jpg, bmp, tiff, tga, exr, hdr, gif, and dds. It works with the common movie formats like mov, mp4, avi, wmv, mpg, and flv. If you want to include audio with your presentations you can add mp3, aiff, wav, and m4a format sound recordings. If your presentation requires a live video signal component as part of the show, Presenter360 can bring that media in from a video capture card in real-time. Besides creating the Presenter360 software, the Front Pictures company is also known for their DomeCaster, Meduza360, SpaceTime360, and Screenberry360 products. For more information about Presenter360 check out the Front Pictures website.

A new fulldome show was just added to FDDB – The Fulldome Database, check it out: Universe in the Mirror by the Sureyyasoft Info, trailer & full length preview available (Turkish only).