As we all know, there is an ongoing refugee crisis that began in Europe in late February after Russia's invasion of Ukraine. Almost 5.1 million refugees have since left Ukraine (as of 20 April 2022). Approximately one-quarter of the country's total population had left their homes in Ukraine by 20 March; 90% of the refugees are women and children. According to UNICEF, by 24 March 2022, more than half of all children in Ukraine (7.5 million) had been forced to leave their homes, of whom approximately 1.8 million had left Ukraine.
[data sources: The UN Refugee Agency and Wikipedia]

Many European countries have been welcoming and offering support to refugees. The EU has granted Ukrainians who flee the war a blanket right to stay and work throughout its 27 member nations for up to three years. Refugees will also receive social welfare and access to housing, medical treatment and schools.

The response has been gratifying! Below is the list of the shows whose audio tracks are available in Ukrainian:

We'll update the list as soon as new shows are added. If you are a producer willing to share the Ukrainian translation of your show(s), please connect with us.

The materials are made available through a repository on Google Drive that we created and made freely available without the need of filling out any web form or anything else that would just complicate the process. We want it to be a 'grab-and-use-it' process.

This initiative couldn’t have been made without the support of our friends at Front Pictures. Of course, the support of each of the other fulldome producers was key too – first of all, the team and management of the Kyiv Planetarium who approved and supported this initiative while their city was under attack.

The Fulldome Database is a neutral and independent organization but this doesn't mean we don't have our own opinions and ethics: we are strongly against war. Any war! 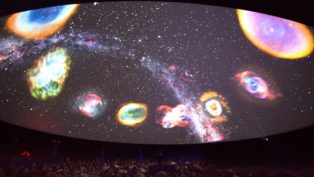 Did you like fulldome show the Incredible Sun? If you did, we would like to offer you another show — the Incredible Universe. The price is incredible, too!

New Fulldome Show: All We Are

A new fulldome show was just added to the Fulldome Database, check it out: All We Are by Visualization Center C Info and full length preview available.